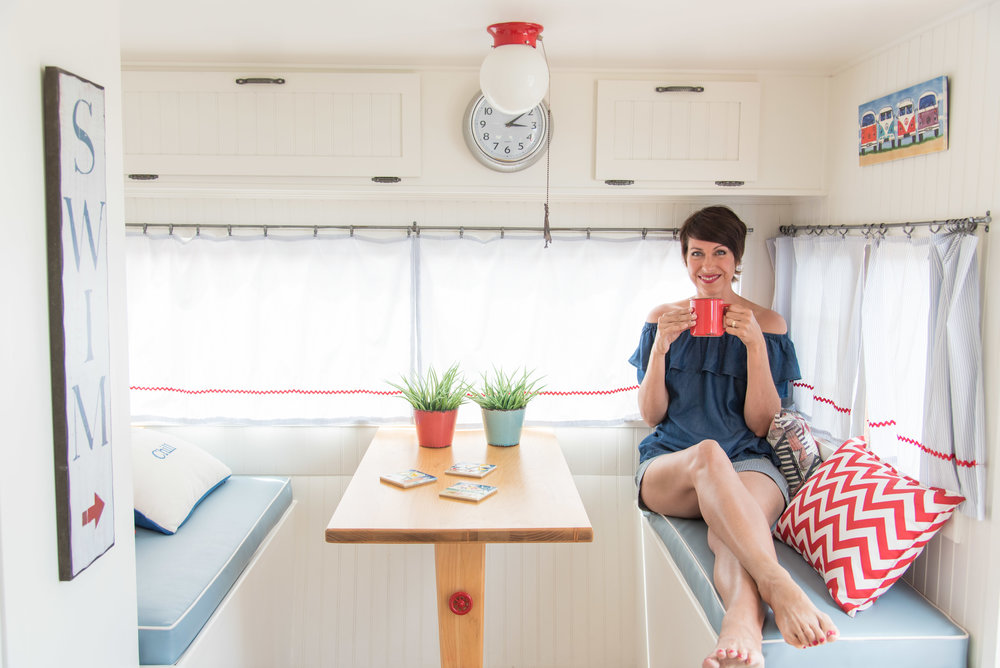 THE ART OF THE "VINTAGE GLAMPER"

What exactly is a vintage glamper you may ask? A vintage glamper is what I refer to as, the Best Thing Ever! However, it is also what my husband Jay refers to as his wife’s worst idea to date, which resulted in an insane amount of work for him for over a year. A happy wife is a happy life (so they say) I kept reminding him. Jay will not admit it, but one of his favourite activities of all time is chilling in our vintage glamper—equipped with a wine fridge I might add.

I will admit the romance of a totally redone vintage glamper (which bordered on an obsession with me) certainly did not align with the unbelievable amount of work involved. In our case, I convinced Jay that we should buy an original 1968 Travelaire camper, which had no upgrades done to it so we could put our own spin on the project. Did I mention we viewed this trailer at dusk when it was verging on dark? Boy, did it look charming when there were no lights on it… it was a total gem, I just had to have it. I thought a few coats of paint, a new floor and new upholstery would transform the little prize, and all its potential could shine through. WRONG.

The first piece of advice, do not buy a 1968-anything in the dark. I was so obsessed with the idea of my vintage glamper at this stage, all I saw in the dark that evening was the charm. I will admit I was beyond naïve in this regard, but really, all great things are born from a lot of very hard work. Sometimes being naïve is not such a bad thing; if we all knew how hard some things were going to be, we would never undertake them in the first place. So, began the love affair with our glamper.

The first piece of advice, do not buy a 1968-anything in the dark.

Let’s just say that I learned a lot of hard lessons with the complete remodel on this project. First, it was likely not a wise idea to have my husband install floor to ceiling beadboard in a 1968 camper. Nothing lined up in this little trailer. Luckily for me, once Jay had started, he refused to give up. He was very grumpy for over a week during the install, but even he will agree it was well worth it.

Second, when you buy a 1968 camper and the sellers advise you it had not been used for years, do not assume that is the case. It appeared this sweet camper was at least being used for its bathroom facilities. So, on a bright and sunny Sunday morning, we arrived at the glamper site wanting to climb under the trailer to saw off all the old plumbing pipes from underneath. We were lucky as our glamper would be installed in Osoyoos, where it would be plumbed into existing plumbing. Therefore—to our delight—the sewage tank and pipes were not needed. This should have been a very simple job. Good thing Jay had his glasses and work coveralls on because when he started to saw through those pipes, well let’s just say the bowels of the sewage tank and pipes went everywhere. That was not a happy day at the glamper site. 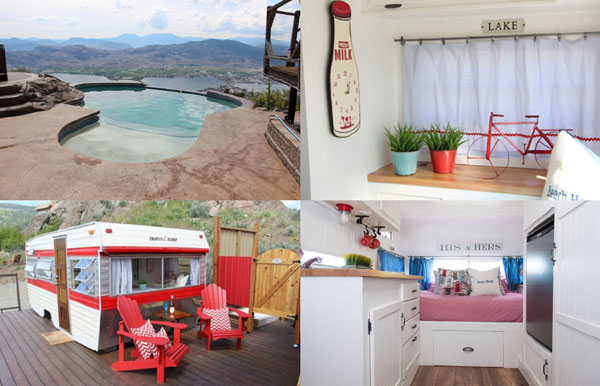 The good news is we now have an adorable bathroom with a brand-new toilet, floor to ceiling beadboard of course, and gorgeous hardwood flooring. The memories of how we transformed the bathroom have thankfully faded, and we can relive that story and laugh about it.

I honestly thought this entire endeavour would be a very simple project. But, in the end, we stripped the glamper down to the bones and started from scratch. It was not our intention, but the further we delved into the project the more rot we discovered, and the more rot we discovered the more we tore out. Did I mention how critical scale in a 16-foot trailer? Being a furniture designer by trade, I know more than most people about scale. Do you think I remembered all the tools and rules of my trade? Nope, I got carried away again. However, I only miscalculated regarding one thing, unfortunately, but it was rather important. Jay is 6’1”, I am 5’11”. Why I did not prioritize fitting a queen size mattress into the glamper is a bit beyond me. I was more focused on beautiful kitchen cabinetry—all maple of course—than I was about our sleeping quarters. In addition, our puggle Winston sleeps with us, and he likes to lay sideways. So, this miscalculation was rather unfortunate. The positive result to my measuring mistake is that in the morning, I can reach the button on the coffee maker with my toe while remaining under the covers in our teeny, tiny, double bed. Glass half-full folks.

I did have my priorities straight in the end when I sacrificed a few drawers so we could have a wine fridge. Thank goodness, I was focused when it came to that bit. And after the first year when the temperatures were over 40 Celsius—the camper which is essentially a beautiful tin can, can make you feel like you are a marshmallow in a fire pit—we installed air conditioning. Our little slice of heaven is now complete. 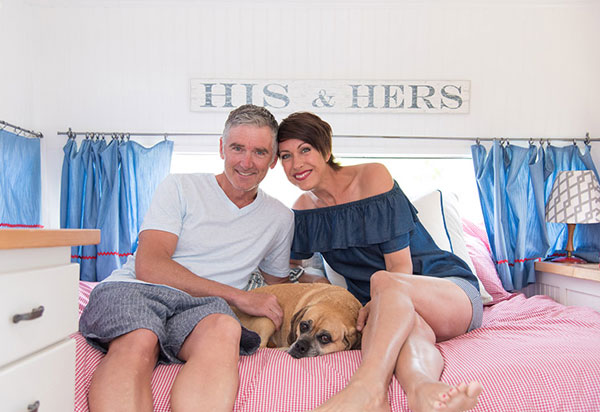 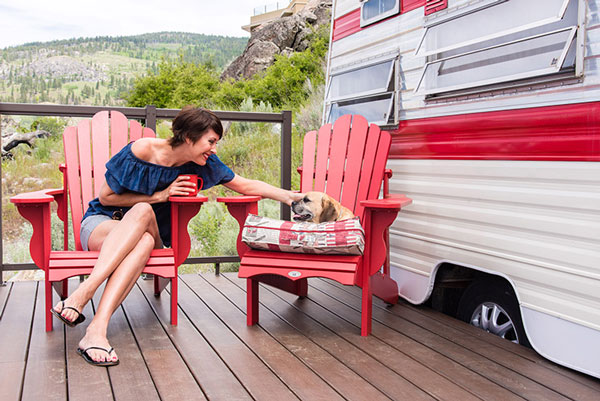 I design furniture and homes that are more neutral in a palette and full of texture so the vintage glamper was my chance to step out of my comfort zone and really pay homage to the era the trailer was from. I must say, this was one of my most enjoyable design projects to date. I selected baby blue vinyl for the banquette cushions and had custom gingham bedding and denim and ticking draperies made. Red, blue and white were the theme and it ties into where the sweet glamper sits today.

My brother-in-law and sister own a beautiful cabin on a mountain overlooking Osoyoos lake in BC. This cabin has an unbelievable outdoor shower, gazebo, infinity pool, hot tub and on and on. The glamper is built into the deck that surrounds the cabin so it is like one huge outdoor entertaining space, the most unique I have ever seen. The entire place is usually rented for the three summer months, but we get to enjoy the property and the glamper in June and September. That combined with all the cycling and winery touring we do, makes this one of our favourite places to stay in the entire world. You really need to see it to fully appreciate it how wonderful it is.

Now I want a vintage Airstream for my next project, but Jay has still not recovered from this project even though it was completed three years ago. Perhaps in another three years, I might get somewhere with this topic! 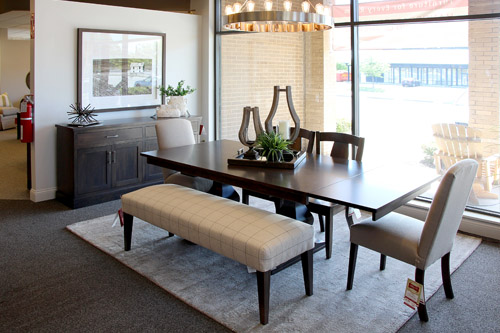 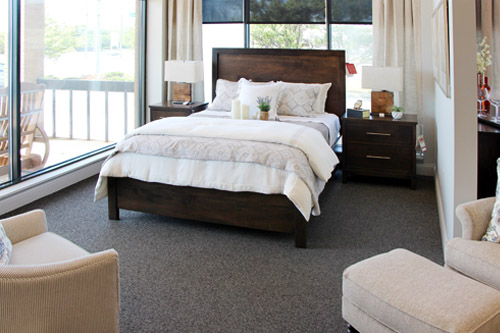 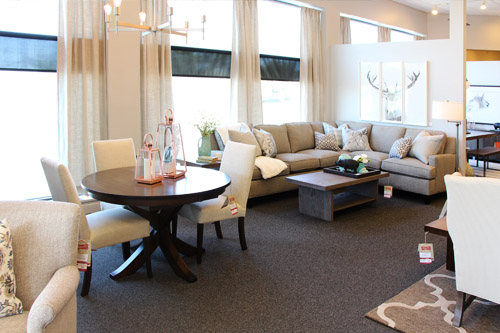